After lunch, Yi went home with CY to work on her presentation for the e.g. Conference. Hub and I didn't know where to go and ended up at Pier 39. 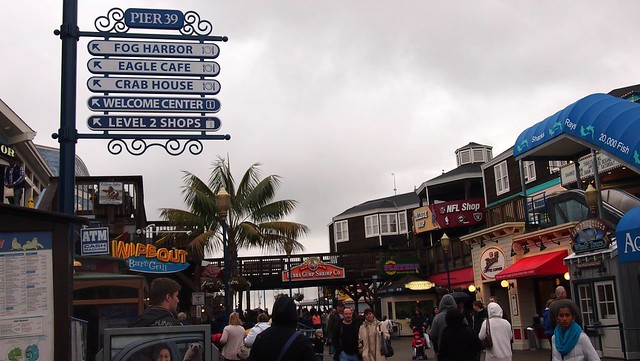 The first time I was here, I liked it. This was my third time and I found it a very typical tourist trap, American style. 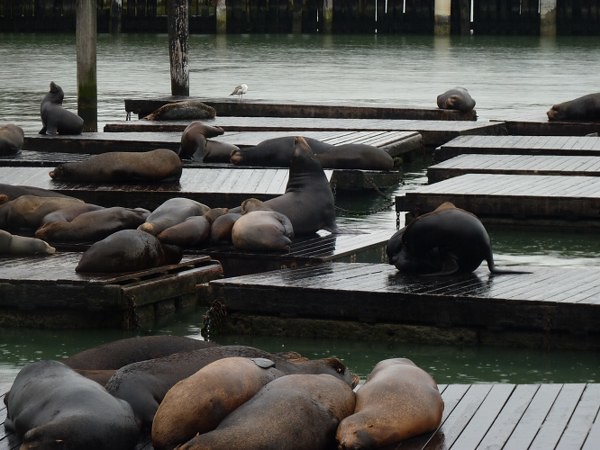 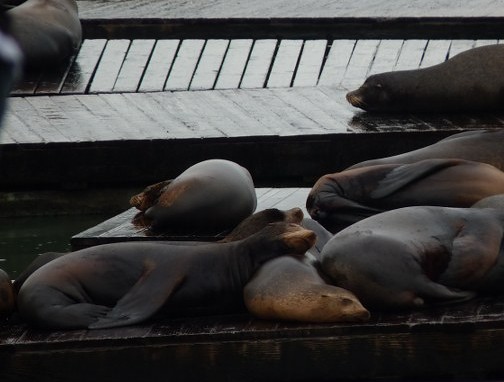 The only thing worth going to Pier 39 for is the seals. They were exactly the same as I last saw them--lying down and oblivious to everything. 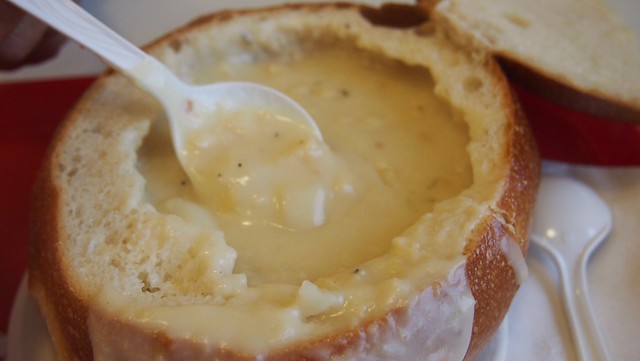 Both Hub and I missed clam chowder in a sourdough bowl and we intended to eat lots of it. This first bowl was so bad (a 2 out of 10), we were confused. Was it our tastebuds or was it our bad memory because when did clam chowder become so horrible? There were no clams and the soup was very salty, tasted terrible and was so thick that it was like glue. There were many restaurants for clam chowder in Pier 39, and we had to go to Chowder. I was told later by CY's friend that Boudin Bakery (where the SF sourdough bread was first made) makes good bread and their chowder is still pretty good. Dang. 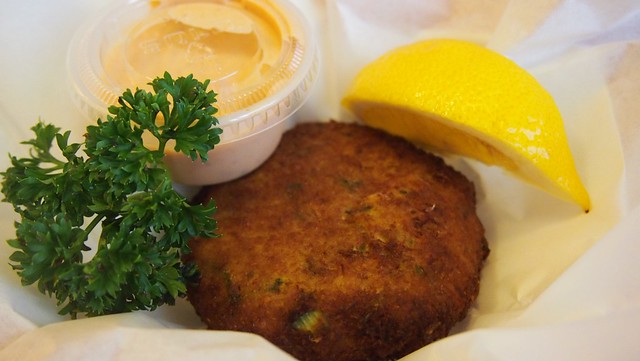 Chowder's crab cake was also disappointing, to say the least. I had crab cakes at Cheesecake Factory on my second day in SF and they were surprisingly good. 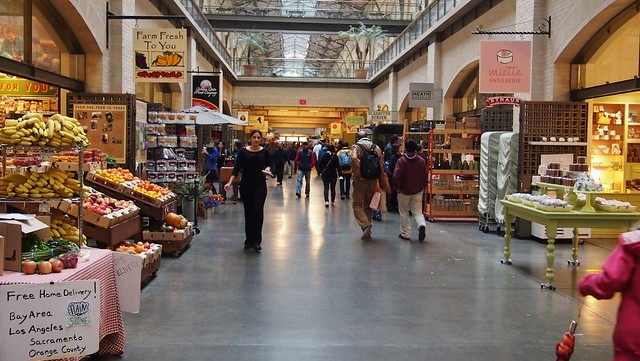 From Pier 39, we went to the Ferry Building in search of Miette, the cake shop I've always wanted to visit. There's Miette on the right. I bought some cupcakes to go. They were good. 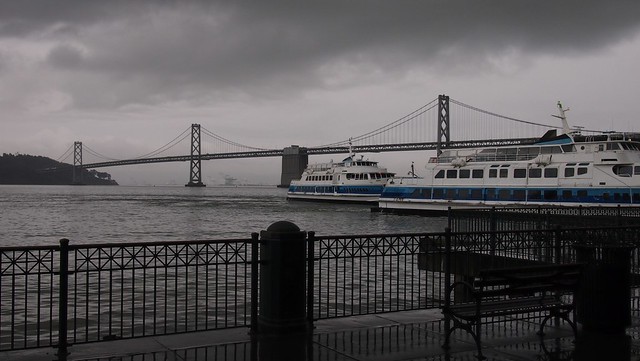 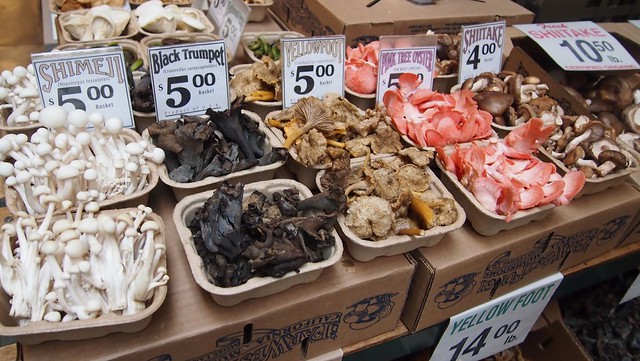 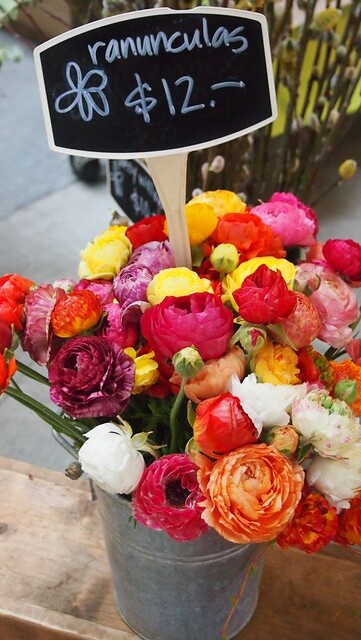 I had to go to Lombard Street, supposedly the crookedest street in the world (but it's not, I read somewhere). We were there on our previous trip and had fun driving down the street. This time we didn't have a car so we had to walk up. It was a tough walk. 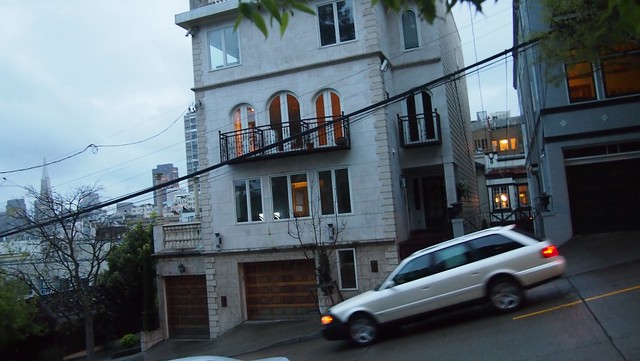 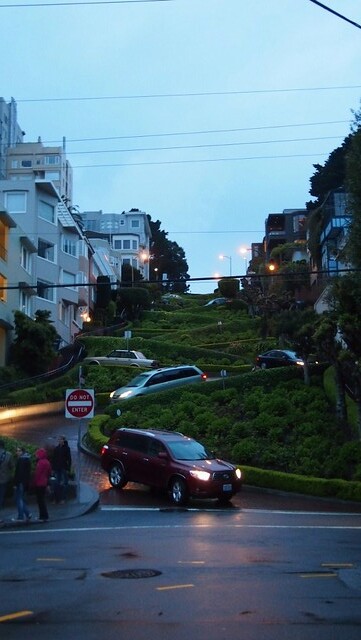 The street wasn't as pretty as the last time because the hydrangeas are not in bloom yet. Plenty of tourists; pity the residents.

In New Zealand, there is a street so steep that for years after I had nightmares of sliding down uncontrollably backwards in a car. I can't remember which city the street is in. I never want to ride on that street again. 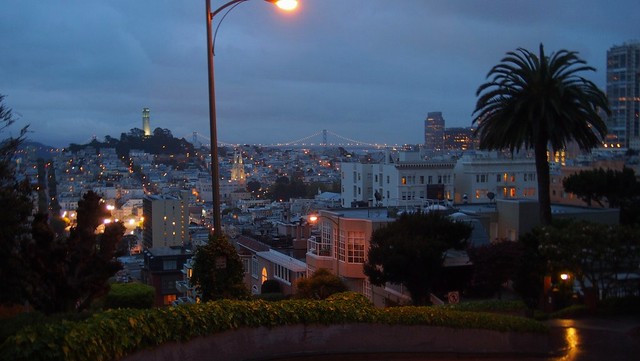 Taken from the top of the street. 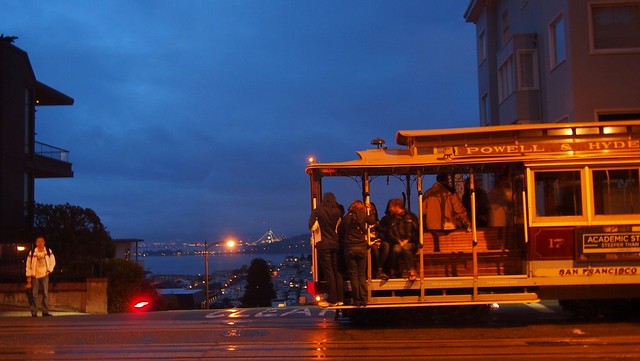 It started to drizzle and we were faced with having to walk all the way down. Then we saw a street car going the other way, away from the city. Surely there would be one going to Powell St. Sure enough, one came but it was full. We got on anyway, because it was really drizzling then, and it turned out to be one of the 'funnest' ride I've ever had. We didn't pay because the conductor didn't ask us to. Maybe we were expected to have paid on the way up, but I didn't care because it was raining.

I stood with one hand on the pole, holding my Miette cupcakes and the other my Olympus micro four third camera (which takes very good photos; I am pleased with it) and Hub stood behind me because I wanted to be outside so that I could take photos. He said "We can't be too old because the young people behind us didn't offer their seats." Are you kidding, I said, it's raining and nobody'll give up their seats to get soaked. But it turned out we got the best view and the youngsters could only peep through gaps between the standing passengers. 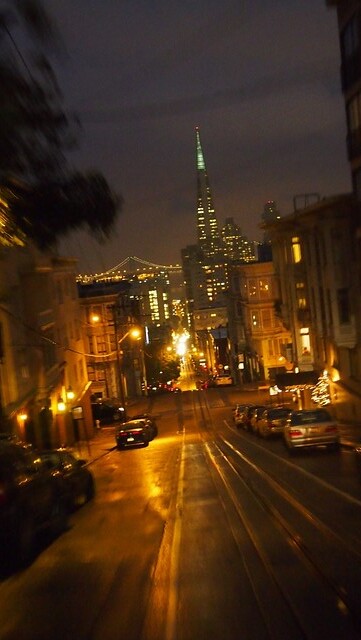 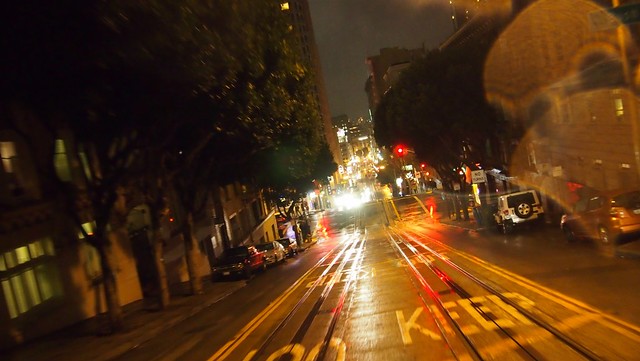 Remember movies scenes of cars flying on the streets of San Francisco? We were both standing and hanging onto the poles, nearly brushing with other passengers on the streetcars coming in the opposite direction. The other passengers, young teenagers, were screaming at every dip of the street and I joined them too, screaming whenever I saw that we were going down yet another steep slope. There were so many times when I thought that I couldn't hold on anymore because my arm and hand ached. The rain fell on my face, my handbag, it was cold, my feet ached, and I thought it couldn't be happening, me at my age, hanging out at the side of a runaway streetcar on a cold rainy night. It was half nightmare and half Universal Studios. The 30-minute ride felt forever and my Miette paperbag had torn but luckily the cupcakes were still pretty. What a thrill, especially when I didn't expect it. 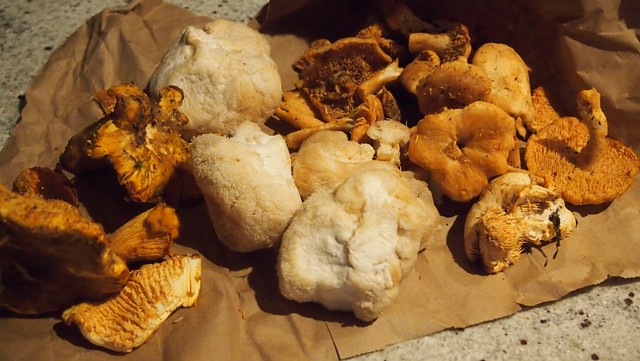 We got to Westfields and walked into Chipotle for a Mexican dinner but they were just closing. We got home, cooked some instant noodles and fried the assorted mushrooms. The white ones that looked like brains to me were spongy and slightly bitter. What a night. You must take that roller coaster ride in a streetcar down from the top of Lombard Street with standing room only and make sure it's on a rainy night.