We got in midnight last night and were told that Yi's Jetstar flight was cancelled and they had put her up in a hotel for the night. Which made me thankful we chose to transit Yi in Singapore and not KL. First thing in the morning we got a call from Sniffer's discipline teacher. It was Sports Day and he was not seen in school. We were told to search the Damai cyber cafes and if he failed to appear, he'd get a black mark. I dressed for the role--jeans, shirt and jacket, sunglasses and mean look, considered bringing a baton, and marched into all the cyber cafes in Damai. Sniffer got lucky because a junior boy's mom got to the cyber cafe first, slapped her boy (which I fully applaud her for) and the rest of them scrammed off back to school. Did I really think that life would be easier when I have only one kid to contend with? Such is my life, and there must be a reason God gave me more sons than daughters.

We had no access to the internet in Singapore and I purposely did not make a list of places to eat because I wanted a relaxed trip where I can eat wherever I happened to be. I can tell you that that's a doable thing in Hong Kong, where if the food's not good the restaurant will close within a week, but in Singapore, you better know where to eat. I know you are thinking 'She's dissing Singapore again' but hey, between Singapore and Hong Kong, I'd rather live in Singapore where it's safe, clean, efficient, not chaotic and Singlish can entertain and embarrass (gosh, I didn't realise until now that there are two 'r' s in embarrass) you at the same time. But as far as shopping and eating go, hands and feet down, Hong Kong wins by a million limbs.

I decided that on this trip, we'll just eat Sichuan food and some good wagyu. Hub as usual is happy as long as I let him eat without guilt while Yi'll eat anything as long as it's Chinese. She thinks western food is boring except for salads, which she loves. I can't remember any exciting salads I've eaten.

I remembered reading somewhere that the best Chinese food are found in Chinatown and Geylang and since I didn't like Geylang, we went to Chinatown. In fact, we went to Chinatown twice, and both times we were disappointed, but I'll tell you that some other day when I get my photos uploaded by Yi. I'll work backwards today and use photos from my camera.

Do you know that Singapore has a swanky new terminal, Terminal 3? We arrived too early for check in so we took the skytrain to T3 and had dinner at a Chinese restaurant called Dian Xiao Er, meaning, I'm told, 'shop's little waiter'. These days when you throw a stone in Singapore it's bound to hit a China Chinese. From the waiters to the cooks to the salesgirls, the whole of Singapore has turned China Chinese. One thing this means is that there's lots of authentic Chinese restaurants, many of them mom and pop owned and run. But, surprise--authentic means as authentic as the local Singaporeans' taste and we were told over and over again by the Chinese waitresses that dishes have been adapted to suit our tastes. They say this like they were doing us a favor (which they were I suppose) but who wants fake authentic cuisine? Which is maybe why we were so disappointed and ended up, by the 4th day, eating instant noodles and udon with lots of veg and beef and agreeing that it was the best meal we had upto then. 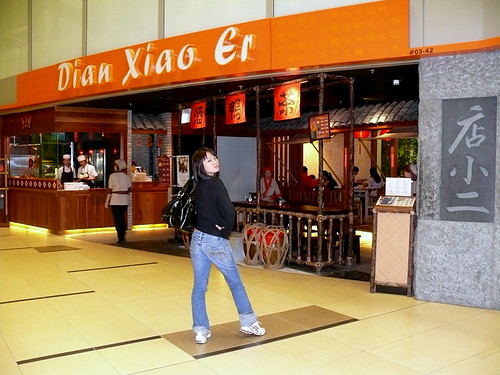 Dian Xiao Er gave us the best Chinese food we had eaten on this trip. Although the ma po tofu, a dish I judge Sichuan restaurants by, was definitely suited for local taste buds, it was tasty and I would recommend this place for a quick meal. We chose the meal set for 2 persons at S$38, which gave us 5 items, including rice and soup, and we added two extra dishes and the bill came to S$66 all-in which was acceptable for airport restaurants. 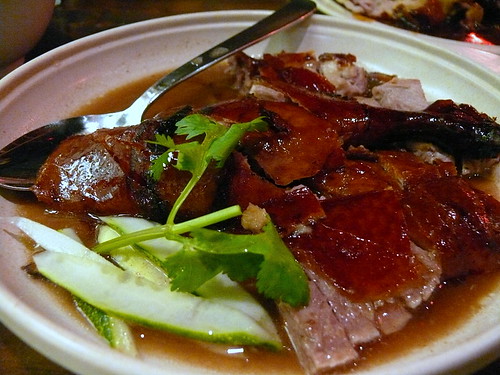 Part of the meal set, the herbal crispy skin duck was very good. I give it high marks for flavor, taste and crispiness. 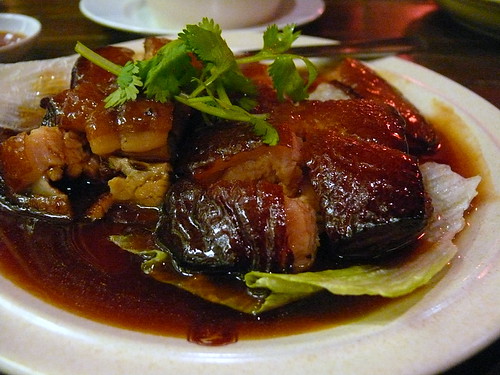 Next on the set was tung po pork, which was good too although, as with all Chinese braised pork dishes, there was too much fat to meat. 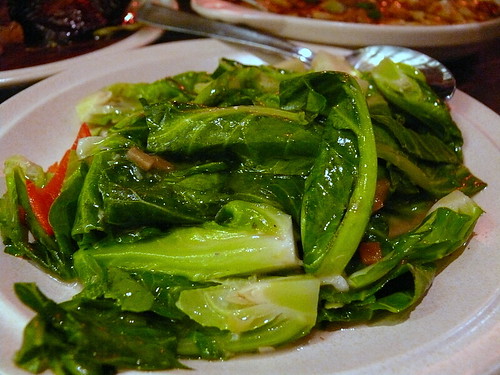 The last set dish was a simple fried baby kailan, done very well. The lotus root soup was good too. 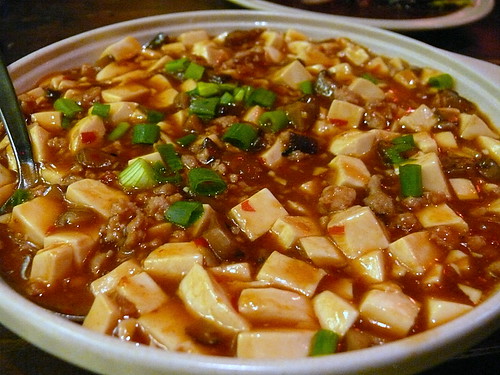 One look at the ma po tofu and I knew it was more 'outside of China' ma po tofu. You can tell by the fact that cornstarch is used to give it a thicker sauce, there's no red chili oil, and most of all there was no Sichuan peppercorns which are essential to this fiery fragrant dish. As with most unauthentic or 'American-style' ma po tofu, the sauce was a sweet and sourish concoction that is no where near the real thing. However, this dish was tasty (as compared to those we had in Chinatown) as long as you don't think of it as ma po tofu. 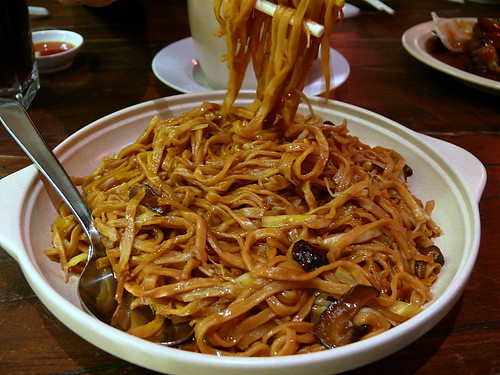 I like yee mien, the best of which can be found in Shatin, Hong Kong. This is the regular yee mien with dried scallops, mushrooms and yellow chives and it was okay.

If you check in at T1, you are allowed into the transit area in T3 where there are lots of new restaurants. We hadn't checked in and so couldn't enter the transit area. I'm told the shopping's quite good too. I love airport shopping. There's so much to see all in one place and everybody's travelling somewhere, all dressed up in coats and travel apparel and it makes me feel so...excited, like hey, look at me, I'm travelling. And then I go to my gate, and it's further and further away and there's less and less people, and that's when I feel, yeah, I'm travelling...to a place called Kota Kinabalu.